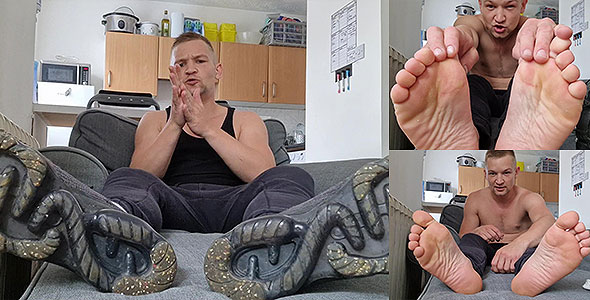 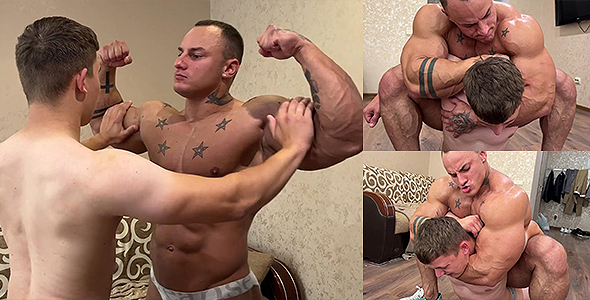 2 New Videos – What starts out as a muscle worship session quickly turns into a muscle and wrestling domination session. The Punisher hurts and punishes this boy with tight bearhugs, headlocks, and more. This is muscle domination at it’s best from this powerful muscle master. Later Big Alpha squeezes a poor boy into submission. The power of Big Alpha’s forearms and biceps makes it impossible for this weak boy to escape. You can see the intensity of his squeezing the life out of this submissive boy. 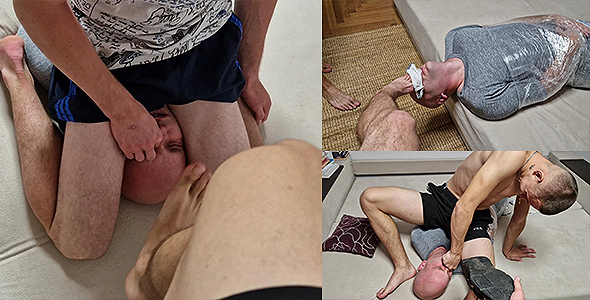 3 New Videos – After dominating this slave over several sessions, Mark showcases the final part of this slave’s taped domination. The obedient slave is completely taped up like a mummy for his bully master to dominate and abuse. Mark makes the slave smell his feet, socks, and sneakers. The degradation gets very intense for this helpless slave throughout this 10 minute clip. In another session with this slave, bully Mark wakes the slave up for some abuse. The slave thought he’d get some peaceful rest but that is quickly disturbed as Mark pounces on top of the slave to wake him up for abuse. The slave is beaten and degraded first thing in the morning. Switching gears, ElliotScissors and Mark decide to wrestle each other when their slave is away. These two doms test out their strength on one another as practice for when they use slaves. Locking each other in a variety of holds and varying intensity is fun to witness. 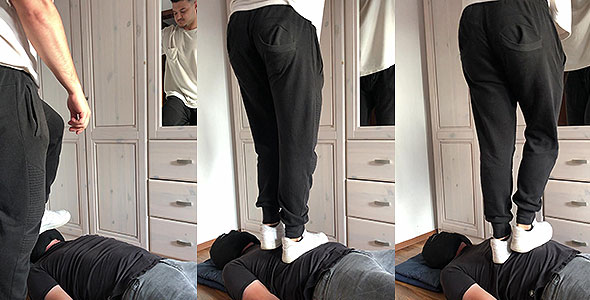 5 New Videos – Master Shivy tramples his slave while wearing some Nike sneakers. The slave lays flat on his back as this powerful jock stomps on his weak slave. This trampled slave endures the full bodyweight of his master crashing down onto him. The abuse doesn’t stop there as Master Shivy comes back with another pair of sneakers for more trample abuse. Trampling hard on this slave, Master Shivy shows the slave no respect. This time around the slave is shirtless so that he can feel the full brunt of Master Shivy’s sneakers stomping down onto him. In a third encounter, Master Shivy treats this trample slave like a human doormat. The masked slave lays prone on the floor with no where to go as Master Shivy squashes him with repeated stomps. The slave agonizes in pain from the bodyweight of Master Shivy stomping down on his slave.

In another encounter with an alpha dom, this masked slave gets kicked and stomped. Laying still with no where to run to, this masked slave is shown no mercy from these intense stomps and kicks. The slave’s body acts as a human trampoline as the dom bounces up and down on the slave showing a total disregard for his humanity – if any remains. In another real time, the slave endures hard trampling from his master. This dom stomps, kicks, and tramples all over the pathetic masked slave. The masked slave nearly gets the wind stomped out of him with some of the increasingly intense stomps. 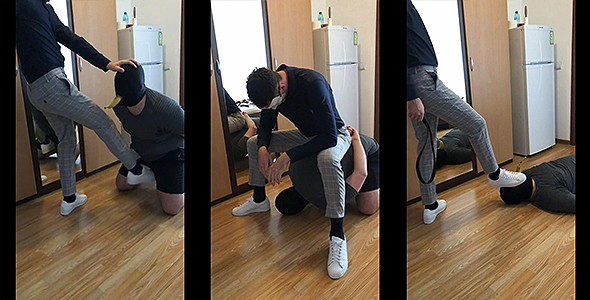 2 New Videos – MasterB1tter loves punishing his slaves. His masked slave gets on his knees for some intense CBT. MasterB1tter kicks the slave in his balls to assert dominance and then beats the slave with a belt. In part 2 of this ball beating session, MasterB1tter continues the abuse of this masked slave. With more ball kicking the slave agonizes in pain. MasterB1tter then makes the slave act as a piece of human furniture as he sits on it to show it is merely property to him.